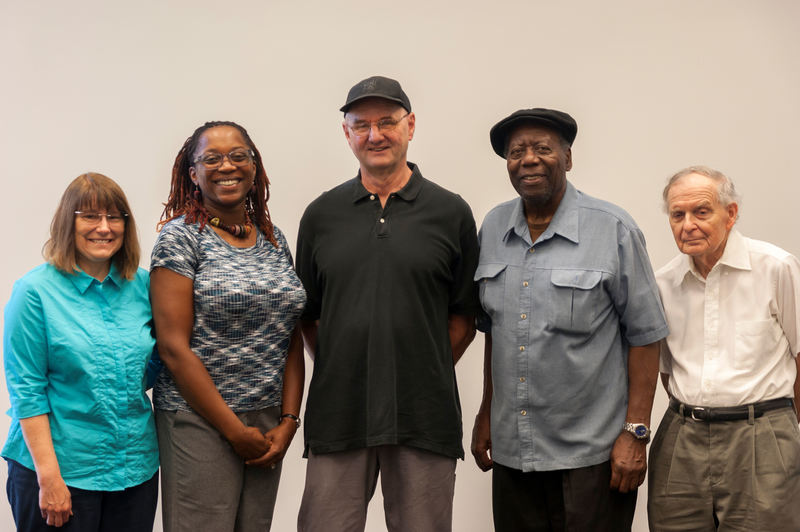 Kathy Goodwin is the Working Class Party candidate in the 5th Congressional District covering Arenac, Bay, Genesee and Iosco Counties, and parts of Saginaw and Tuscola Counties. She went to school outside of Flint in a small town called Montrose, and she remembers the day in high school when they saw a movie about the victory of Flint workers in the 1937 Flint sit-down strike. That was the day, says Kathy, that she first understood that the working class has the power to change the whole society when we’re united and fighting. We are fed the idea that we should vote for someone else who can fix our problems, but, she says, up until now that has never worked! How about busting out of those narrow limits! Kathy stands for the idea that working class people today can figure out how to unite, and that the working class has the capacity to lead a fight so that all the wealth in this country can begin to go to better schools, to fix the broken healthcare system and poisonous water systems, and to provide good paying jobs. Whatever the results on election day, she will feel it’s been a victory if people begin to get the idea that elections are only one day, but the fight is for every day of the 365 days each year.

Andrea Kirby is the candidate in the 9th Congressional District, covering parts of Macomb and Oakland Counties. Andrea was born and raised in Queens New York, to a single mother. She lived with her grandparents, who came up from the South, where they had been sharecroppers. When her grandmother died, Andrea went to Atlanta to live with her mother who was working for a nursing degree. Andrea has worked for almost 20 years at a large medical insurance company and has been active in the union for many of those years. As her mother’s only child, Andrea says that she stood with her mother as she battled and succumbed to cancer. She stood with her as she had to fight for health insurance and unnecessary amounts of paperwork needed to keep public assistance. As she looked around waiting rooms, she saw that she was not the only one. Many workers have to care for family members at the same time trying to balance a steady income, tackling the stress of trying to balance work, family and keeping yourself sane while the banks and corporations steal moneys right from under us. Andrea said she is running to say NO MORE, but she also said it’s not going to be this election or this position that changes anything – it’s going to change when we all stand up, when we take back the wealth that belongs to us, and we all know it does.

Gary Walkowicz is the candidate in the 12th Congressional District, covering parts of Wayne and Washtenaw Counties. Gary has worked for four decades at Ford, elected by his fellow workers to different positions in the local union. He led opposition to contracts that imposed concessions on workers, including the 2009 proposed contract that Ford workers voted down. He was nominated three times for president of the UAW International. He explained his goal this way: “I didn’t have any illusions that I would win, given how the Conventions are controlled, but running was a way to give a voice to the UAW membership, to the thousands of workers who do not agree they should go on paying the cost for the bosses’ crisis.” For the same reason, Gary has run for the U.S. Congress three times, helping lead the effort to put Working Class Party on the ballot in 2016. He sees his candidacy as a way to let all those workers express themselves who understand that the working class needs its own party. And he said that the working class will not have the party we need just because Working Class Party is on the ballot. A working class party is something we will have to fight for. But those who vote for Working Class Party today can be the leaders of that fight tomorrow.

Sam Johnson is the candidate in the 13th Congressional District, covering part of Wayne County, including much of the west side of Detroit. Sam began his life in Alabama, under Jim Crow. He learned from his family not to accept the racism of the Klan and the violence of the cops in a period when the Klan and the cops were often the same. With a target on his back like so many other young men, his mother sent him to LA when he was 20, hoping to keep her son alive. He was a witness to the black rebellion in Watts in 1965, and then, after he came to Detroit, to the rebellion here in 1967. Sam is a Chrysler retiree, still known in the plants around Detroit as someone who stood up against the company, not only for himself, but for his fellow workers. He was active at Dodge Main, Lynch Road, retiring from McGraw Glass in 2000. During more than 30 years, he represented a working class policy, sometimes as an elected union rep, always as a worker who joined with other workers to face the attacks coming from the companies. Whether in the plants or in the community, Sam has always been, as he says, a fighter, someone who sees the big picture, and speaks out for his class. He was one of the chief organizers of the campaign to put Working Class Party on the ballot in 2016. Sam Johnson’s book giving an account of his life, a militant life, was published in 2014. It’s called: A Fighter All My Life: From Alabama to Los Angeles to Detroit.

Philip Kolody is the candidate in the 14th Congressional District, covering parts of Wayne and Oakland Counties. Philip was born into a working class family. His father and mother worked in auto shops, and he went to Detroit public schools, then to Wayne State and the University of Michigan. He started as a teacher, then moved to the State of Michigan, where he worked for 30 years, being active in the union most of those years. Now retired from the State, he comes from years of working in the Department of Civil Rights, where he saw workers struggle against racism and sexism. Even though he’s been retired for many years, he decided to run because, he said, it’s about time! It’s about time for the working class to assert its power, and he wants to be part of the movement when the working class asserts its power. Phil said that the working class has the power to transform society and transform this country. We have to take the point of view that we have no enemies within the working class, and that the only friend the working class has IS the working class. We have to establish this message, and that’s what he hopes to do during this campaign.

Kathy, Andrea, Gary and Sam have each appeared on radio or TV, and their spots will be posted on this page, as they become available.